With the popularity of the Harry Potter franchise, it is no wonder that great things were expected of Harry Potter and the Cursed Child, as the book came with a link to a sorting hat quiz. However, since its release, there have been many mixed views, not all of them positive. I will be taking a look into why the views are so different. When the news first landed that JK Rowling was overseeing a play that would serve as the official sequel to the Harry Potter series, the overall response was enthusiastic, to say the least. After seven novels and eight big-screen adaptations, fans still were not ready to say goodbye to the Wizarding World and welcomed the prospect of yet another adventure starring the Boy Who Lived. However, when Harry Potter and the Cursed Child finally opened in 2016, many fans’ excitement quickly turned to heartbreak. Despite garnering rave reviews from critics and a breath-taking number of awards, the play – penned by Jack Thorne, from a story by Rowling, and original director John Tiffany – failed to impress a vocal contingent of Harry Potter fans.

Many fans were happy that there was an add-on to the Harry Potter fandom, even though the last film came out in 2010. It allowed for adult fans to relive their childhood again by being able to read and watch the play the Cursed Child. Many found it to be enchanting, It was dubbed a heart-warming story and reminds people what Harry Potter is all about – friends, family, and a world unified by love. In that regard, Cursed Child is a masterful blending of maturity. Harry is now an adult man; his story arc reflects a more mature, internal challenge—accepting a child, learning to move on from the past, balancing expectations, and unconditional love. But the story is really about Albus Severus, who goes from a first-year to the fourth year, and so his plotline reflects the earlier books in the series: madcap adventures of time travel gone right and gone wrong, and, in classic Harry Potter-style, being tricked by someone who was villainous all along. 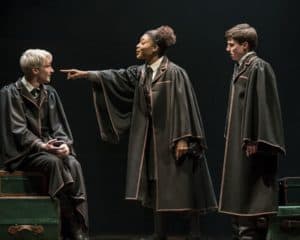 There appears to be more to dislike about the Cursed Child than to love. Many fans were left disappointed by the book and there appears to be a lot of change to adapt to. Complaints were particularly prevalent amongst those who only read the published script – those who witnessed the spectacle live on stage were initially content to overlook what quibbles they had. Yet even many fans who were initially swept up by the emotion and ingenious practical effects on display during a live performance of Cursed Child soon joined the chorus of dissatisfied voices online. Objections to the play primarily centered around the mischaracterization of Harry, Hermione, and Ron. Beyond this, many fans charged Thorne, and by extension, Rowling, and Tiffany with crafting a narrative that flat-out did not add-up, both on its own merits and in relation to the wider continuity established in previous installments.